VIKING CLASSIC BIRMINGHAM DAY ONE – LEYLA’S ROUND UP

HOW GOOD IS IT TO HAVE LIVE TENNIS BACK?

We’re so excited for this year’s event. After a competitive qualifying weekend we were ready for day one of the main draw.

The Brits battled hard out on a sunny Ann Jones centre court on the first day of the Viking Classic.

Heather Watson recovered from a set down to beat Viktorija Golubic 3-6, 6-2, 6-2 .  Heather had an epic battle on her hands but came through the victor with the support of the crowd.

“I’m really happy to get through that. I was a little bit nervous at the end there closing it out but as expected I’m just really glad I held my nerve and came up with some of my biggest serves there.

“It’s just been so great to play in front of a crowd again. Thanks for everyone who came out here and supported us. It was great and I think that’s what got me through that match in the end.”

Watson will play China’s Zhang Shuai, who lost the Viking Open Nottingham to Johanna Konta on Sunday, or Russian qualifier Vitalia Diatchenko in round two.

Harriet Dart and Fran Jones were both both drawn against previous top 20 players.

Harriet put in a spirited performance against French former World No.4 Caroline Garcia before losing 7-5, 4-6, 6-4.

Elsewhere Fran Jones was beaten in straight sets by the No.3 seed Donna Vekic, who overcame the Brit 6-1, 6-3 in their first round match.

WHEN YOU MEET THE BRITISH BILLIE JEAN KING CUP CAPTAIN! 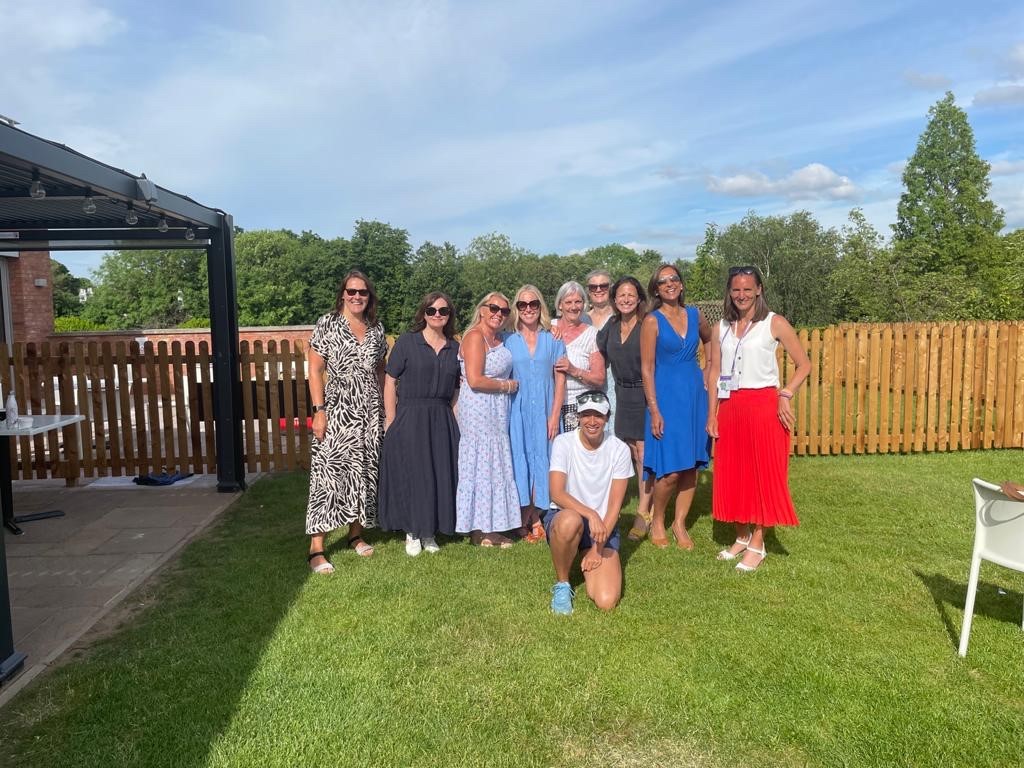 Our Monday ladies group, who have played every Monday for 10 years, are regular Classic spectators!  This year they just happened to meet Anne Keothavong on the clubhouuse events lawn.  A selfie bubble was the order of the day!

LEYLA’S LOOK AHEAD TO DAY TWO!

Elise Mertens, our top seed opens play on Centre Court and has a real battle on her hands with the in-form Tomljanovic. They have conflicting game styles and the Aussie has a better grass court game so this could be a danger match for Elise.

Next match on Centre Court is McNally and Jabeur which is an exciting match up. Jabeur has a lot of variety on her game which plays well on the grass. McNally is one of the USA’s rising stars and has come through qualifying so is riding on confidence.

In the third match, Kastakina has had an excellent start to the year and has a new mindset in tennis. Her all style game is fun and exciting to watch. But her opponent, Hercog, is always tricky and is always a danger on grass.

Ostapenko a former grand slam champion is one of the hardest and cleanest hitters on the tour. She is fearless and knows her way around the grass court. She has won junior Wimbledon and also reached semi finals of Wimbledon.  This is my pick for the title!

Last match is an all French line up. Ferro is in form and has the potential to upset Mladenovic.

On court 1 throughout the day we have former junior world number ones and rising stars to watch.  Fernandez, Kostyuk and Potapova are all future top 20 players. We are lucky to be able to watch them on the way up on their journey.

On court 2, the British doubles pair of Dart and Watson face Bains and Martincova.