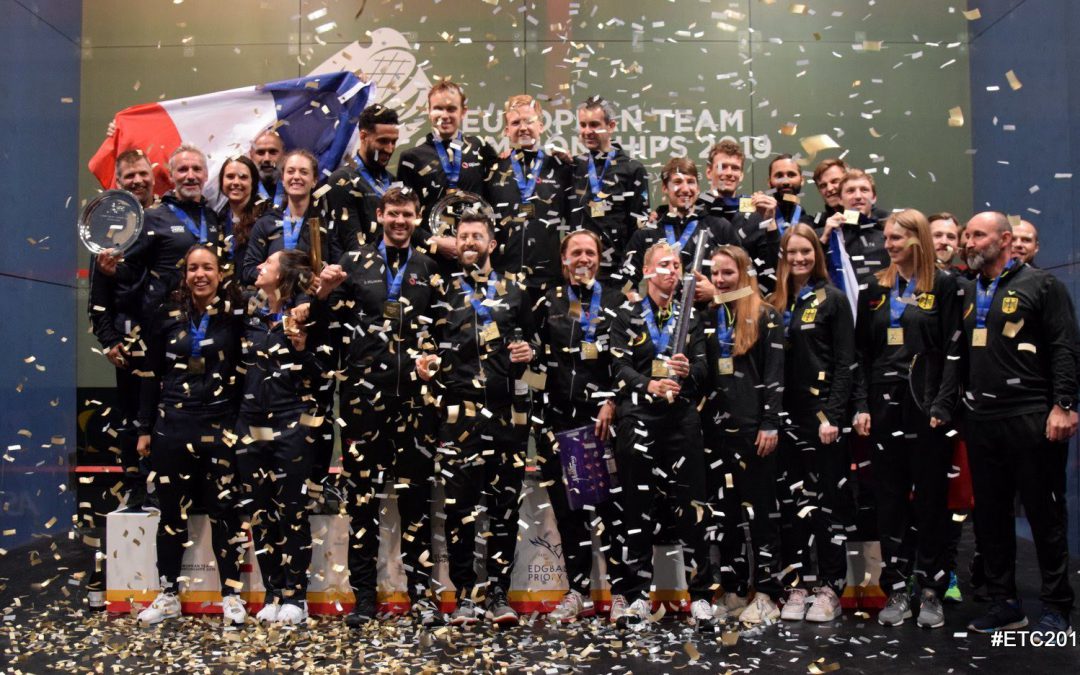 A dramatic final day of the European Team Championships at Edgbaston Priory Club in Birmingham witnessed a remarkable victory by France’s women’s team while England regained the men’s trophy.

England were hot favourites for the women’s title, having beaten France in the last five finals and won the title on all but one occasion in the event’s 41-year history. Their sole defeat came in the 2010 semi-final to – and in – France, where the Netherlands went on to win the final.

Camille Serme put France ahead as she beat Sarah-Jane Perry in four games but Laura Massaro also won in four against Coline Aumard to take the match to a decider. Melissa Alves came flying out of the block, taking the first two games 11-1, 11-3 against England’s much higher ranked Victoria Lust.

Lust fought back to take the third, and again from 1-7 down in the fourth to level at 8-all. But it was Alves who took the next two points, and on her second match ball the impossible happened, a front court winner from Alves, a no let for Lust, and to French disbelief and delight they had finally become women’s European Team Champions.

“We thought it was possible,” said a delighted French manager, Philippe Signoret.

“Melissa can play very well and she was on fire in the first two games. This squad has a great history, I’ve known them since they were seven, so to see them do this is fantastic for them, and for France. And in England, too!”

“We’ve been trying to win this for so long now, it feels great. Thanks to England for pushing us over the years, we’re delighted to finally win one.”

In the men’s final England faced third seed Spain, who had beaten defending champions France in the semis. England had beaten Spain 4-0 in the pool stages, but Spanish number one Borja Golan missed that match and immediately made amends as he beat Declan James in the opening match, James unable to properly compete in the fifth after an injury,

James Willstrop put England level with a straight-games win over yesterday’s Spanish hero Iker Pajares.  Daryl Selby put England ahead with a five-game win over Bernat Jaume, which left England needing one game from the final match and Spain needing a three-nil win and points countback.

Tom Richards was always ahead against Edmon Lopez, and finished the match as he took the game 11-9, Lopez diving in vain into the back corner.

“I’m really proud to have been able to captain this team to the title,” said Captain Selby. “It’s been a long time since the event was held at home, so to do it here with the support of the crowd makes it even more special.

“It’s been a great event, superbly organised, and we’re all grateful for that and the support of the referees, volunteers, ESF, Edgbaston Priory Club and all the England Squash support staff.”

The day started with the women’s 3rd/4th match which saw Belgium’s Nele and Tinne Gilis take them to victory over Scotland for a second Bronze medal in a row.

“Very happy,” said Belgian manager Ronnie Vlassacks. “Not only with the Bronze medal, but to see how we’re closing the gap to England and France. With Nele and Tinne still so young and having a few years to improve, we hope what they’re doing will help us get some more young players to strengthen the depth of the team.”

The Scottish men went one better as they beat France in the men’s 3rd/4th, after narrowly losing to the former champions in the pool stages.

Across the four days over 700 local schoolchildren attended coaching clinics at the glass court venue, and enjoyed watching some of the matches.

Finland’s Men return to Division One after a three-year absence, led by Olli Tuominen playing in his 22nd ETC in a row. Also promoted were the Czech Republic who beat Finland in the final.

The Finnish women beat Czech Rep to go back to Division One for the first time since 2010, before losing to also promoted Germany in the final.