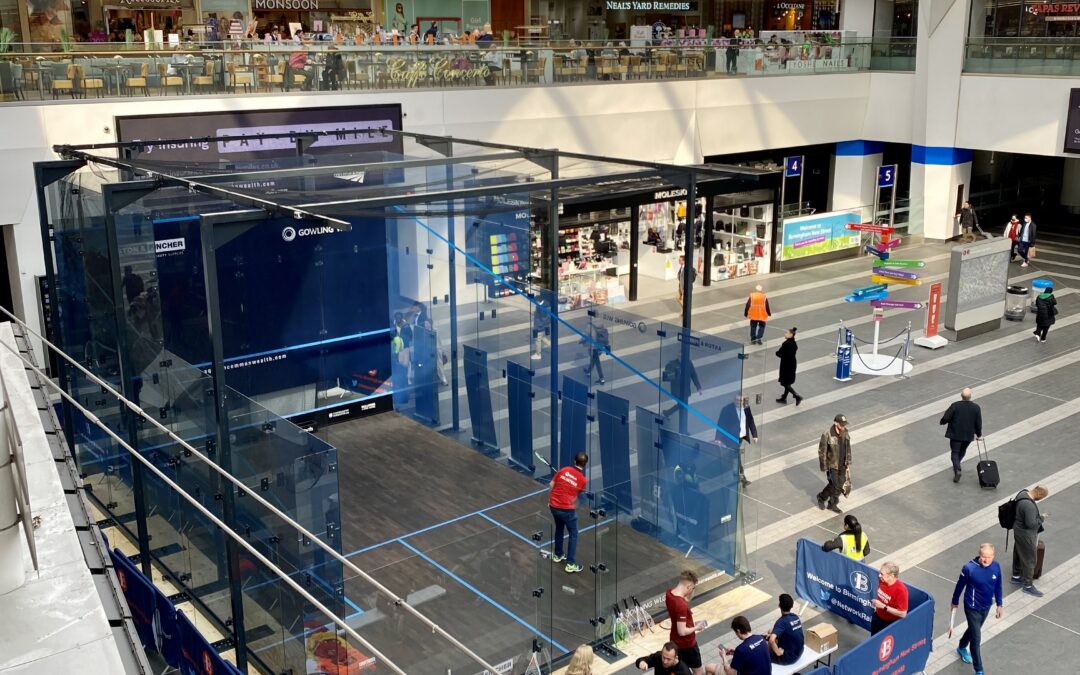 Thousands of commuters and Birmingham residents are set to discover the exciting sport of squash this week as a world-class glass court has been installed at New Street station’s state-of-the-art atrium.

The glass court has been built to inspire a new generation of players and create a lasting legacy for squash across the region as the sport celebrates its starring role in the Commonwealth Games this summer.

An action-packed week of activity is planned which will see thousands of school children having a hit on court as well as open play sessions for the public, a number of taster sessions including squash for beginners, plus exhibitions matches and an opportunity to meet professional players.

The station is one of the busiest transport hubs in Europe and is used by an estimated 170,000 people a day, many of whom may never have played squash or seen it played live. Many of our coaches and players are down at Grand Central, taking part in the activities, encouraging the public to pick up a racquet for the first time and promoting membership.

Do pop down and take a look if you’re going into the city this week!

The court is the latest in a series of initiatives by Squash United, the collaborative group leading the squash legacy programme which is an official project of United by Birmingham 2022, the community programme for the Commonwealth Games.

Squash United was established in 2021, and brings together key stakeholders in the sport, including: England Squash, Off The Wall Squash, the Professional Squash Association Foundation, Rackets Cubed, passionate squash fans in the West Midlands, and the World Squash Federation.

The group came together to capitalise on the upcoming Birmingham 2022 Commonwealth Games to ensure that a lasting legacy is built, expanding the game and making squash more accessible than ever.

The project was featured on ITV Central last night. To view go to ITV Central and start the video from 12.25 to see the full feature.