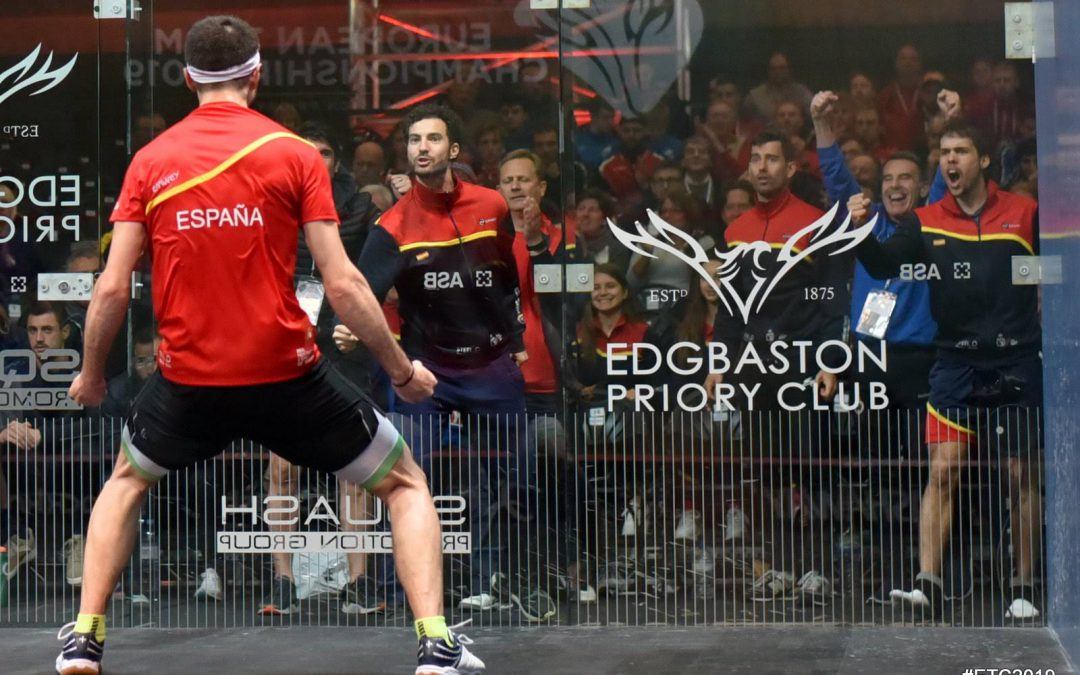 The Spanish men’s team created history on semi-finals day of the European Team Championships at Edgbaston Priory Club, as they sensationally beat defending champions France in a long and dramatic match to reach the final for the first time.

The women’s final will be between top seeds England and France, for the sixth year in a row, as they beat Belgium and Scotland in contrasting style.

England’s women have only lost once in the 41-year history of the event and extended their winning run against third-seeded Belgium as Victoria Lust and Sarah-Jane Perry won the opening two matches. Lust was tested in the first two games by Yara Delagrance before easing through the third, while Perry was taken to four by Nele Gilis – who led 9-7 in two of the games she lost. Laura Massaro won the dead rubber, coming from a game and 8-3 down to beat Tinne Gilis.

France had to come from behind after Scotland’s Georgia Adderley battled her way to a 3-2 win over Melissa Alves, recovering from losing the fourth 11-2 to take the decider 13-11 on her fourth match ball.
Camille Serme and Coline Aumard repaired the damage for France with three-nil wins to take them through to a sixth successive final against England.

Spain’s astonishing win came after Gregoire Marche had put the French ahead with a tough four-game win against Borja Golan, the 16-time Spanish champion playing his 21st European Team Championships. The rest of the Spanish team are more youthful, and they needed all their energy and determination to complete a stunning comeback.

Current national champion Edmon Lopez fought back from one-two down to beat Victor Crouin, blitzing the decider 11-1, and Bernat Jaume put Spain 2-1 up with a three-nil win over Benjamin Aubert.

This left France’s Lucas Serme needing a 3-0 win, while Spain’s Iker Pajares needed to take two games. Serme took the lead, Pajares levelled and then had an effective match ball before Serme regained the lead 12-10. The Spaniard now needed just 6 points in the fourth game to give Spain the win but he did better than that, taking the game 12-10 to put Spain through on games countback after 104 minutes.

“It’s unbelievable,” said Golan. “In an individual sport, to play for a team in events like this is the best squash has given me. This is a great event every year, but to make the final after so many years, with a group of players like this, I’m so proud.”

“Not bad, but they need to go one better to equal me! Seriously, they’re such a good team. After losing the first match and Edmon being 1-2 down in the second they fought back so well. After Edmon won, Bernat knew he needed a 3-0 to put us in the driving seat and he did just that. We knew Iker could win, but Lucas played so well but so did Iker.

“It’s a great team effort, they were all very strong physically and mentally when it came to the crunch and I’m very proud of what they’ve achieved tonight.”

England won through to their 27th consecutive final with an assured win over Scotland, who were back in the semi-finals after missing out last year. Greg Lobban took the first game against Declan James, but thereafter it was all England as James took the next three, Tom Richards beat Angus Gillams in three – coming from 0-6 in the third – and Daryl Selby took the two games that England needed against Rory Stewart to end a long day at Edgbaston Priory Club.