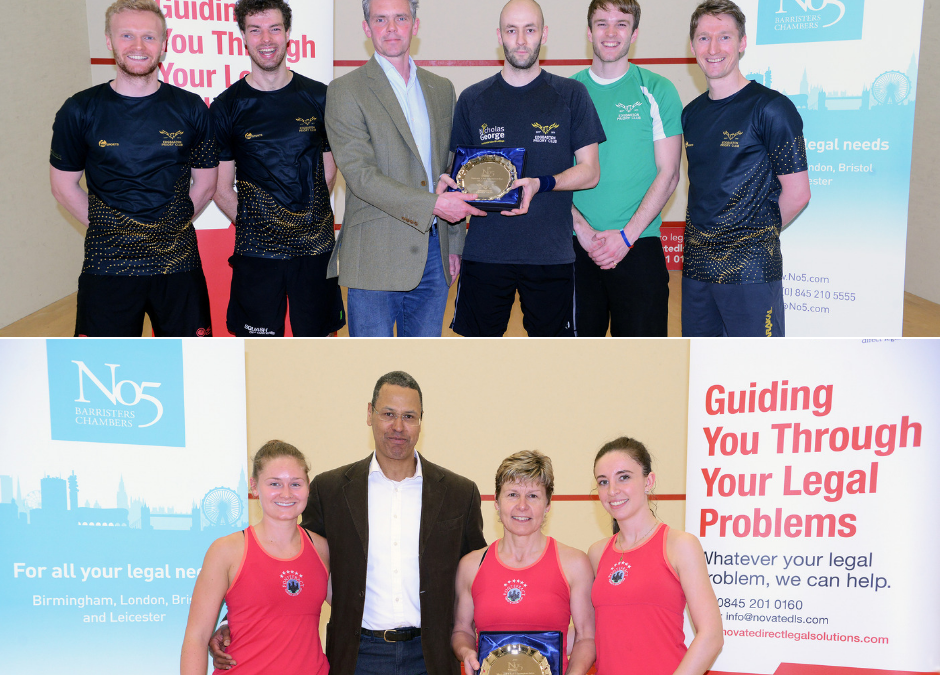 The No.5 Barristers Chambers National Club Championships 2019 finals weekend is taking place on Saturday 27th – Sunday 28th April at Edgbaston Priory Club. This will be our fifth and final year of running these championships and we are proud to have reinvigorated this competition.

When Edgbaston Priory Club took over the National Club Championships in 2015, only 25 teams entered the three categories. Over the past five years, we have developed the event into a festival of squash. In this our final year, 95 clubs entered in eight different categories, including Men’s, Women’s, Squash 57 (Racketball), Mixed O35’s, O45’s, O55’s, Mixed Juniors and Non-County Players.

The final 32 clubs will compete in the eight categories, in what will be the highest quality finals weekend in history. Players will include, Declan James, Daryl Selby, Tom Richards, Ben Coleman, Chris Simpson, Alison Waters, Emily Whitlock, Fiona Moverley, Millie Tomlinson, Hollie Naughton and Julianne Courtice competing for teams in the Men’s and Women’s events.

In the Squash57 / Racketball, we have some of the best players in the world including, Daryl Selby, Nick Matthew, Mike Harris and Ben Coleman.

Entry is free to spectators.

Mike Harris (Tournament Organiser) commented, “Edgbaston Priory Club are proud to have organised and hosted these prestigious championships, growing the event into the largest club team championships in Europe. We would like to take this opportunity to thank No.5 Barristers Chambers for their support over the past three years; their support has enabled us to grow the event into what it is today”.

For all the important information on teams and draws click on the links below: