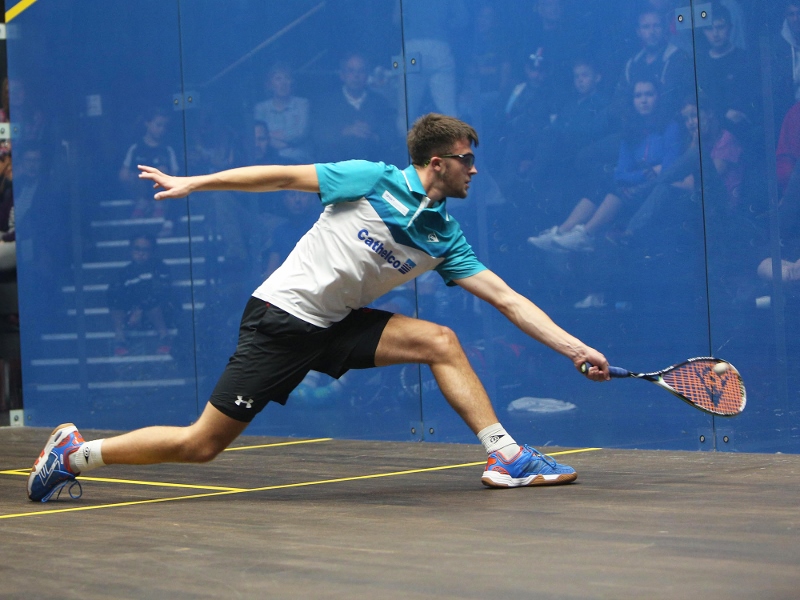 England’s national coaching team has high hopes for the English contingent competing at the Dunlop British Junior Open (BJO) from 2-6 January in Birmingham.

And with 11 of those players competing at the 2019 event, National Junior Coach Lee Drew is optimistic about England’s performance:

“Our performance at last year’s British Junior Open put England firmly back on the map at world-level. We’re looking to build and capitalise on this success and have high hopes for our home heroes.

“Across the age categories, we’ve a good spread of strong contenders who have a track record of performing well on home soil against the world’s best.”

“Nick’s of world calibre and has made great strides in the last 12 months reaching the last eight of the World Junior Championships in July,” says Drew.

“Similarly, Lewis Anderson has had a promising year claiming the Dutch Junior Open Under 19 title in July despite being unseeded and knocking out several top seeds.”

Two strong contenders in the Girls Under 19s are Essex duo Elise Lazarus and Alice Green whose fine form of late has seen them earn a 3/4 and 5/8 seeding respectively.

“Elise and Alice have got that pedigree behind them, having represented England at the World Juniors but also having performed very well at last year’s British Open which stands them in good stead,” says Drew.

Sam Todd moves up to the Boys Under 17s as second seed and is a strong contender given his track record at the BJO. The Pontefract sensation will be eying up his third championship crown after claiming the Boys Under 13s and Under 15 titles.

“Sam is world-class and performed very well at the World Juniors in the summer reaching the third round at the age of just 15, so there are high hopes for him to perform well at the BJO despite competing another year at that age group.”

In the Girls Under 17s, England has two 5/8 seeds in Katie Malliff and Margot Prow who have a string of titles to their names.

“Jonah and Sam are two strong contenders who are developing a great ability to cope in the high-pressure situations a major tournament can bring. Both have the skill and ability to go all the way,” believes National Performance Coach Josh Taylor.

England is well represented in the Girls Under 15s with two 5/8 seeds, and Taylor is confident that Asia Harris (Yorks) and Torrie Malik (Sussex), joined by 9/16 seed Emma Barley (Suffolk) can cause some upsets.

“I’ve got a lot of confidence in Asia, Torrie and Emma in exceeding their seeding. They’re used to the environment and hopefully they’ll build on some of their recent results.”

European No.1 Abd-Allah Eissa (Warks) headlines the English charge in the Boys Under 13s and has earnt his second seeding through several fine performances over the past year including claiming the Dutch Junior Open title.

Eissa’s younger sister Mariam is seeded 5/8 in the Girls Under 11s alongside Emily Coulcher-Porter (Oxon) and has the potential to go all the way having won the British National and English National Under 11 titles this year.

Home hopes in the Boys Under 11s lies with Dylan Kalar (Berks) and Ronnie Hickling (Surrey) who’ll be itching to progress past the second round this time, and it looks promising with a 5/8 seeding.

About the Dunlop British Junior Open
The Dunlop British Junior Open is the most iconic and prestigious junior squash tournament in the world. Now in its 93rd year, the tournament attracts the finest youngsters from around the globe. Former champions include World No.1 Mohamed ElShorbagy and 2018 Commonwealth Games Gold medallist James Willstrop. Official channels: www.britishjunioropen.com | facebook.com/bjosquash | twitter.com/bjosquash #bjo2018