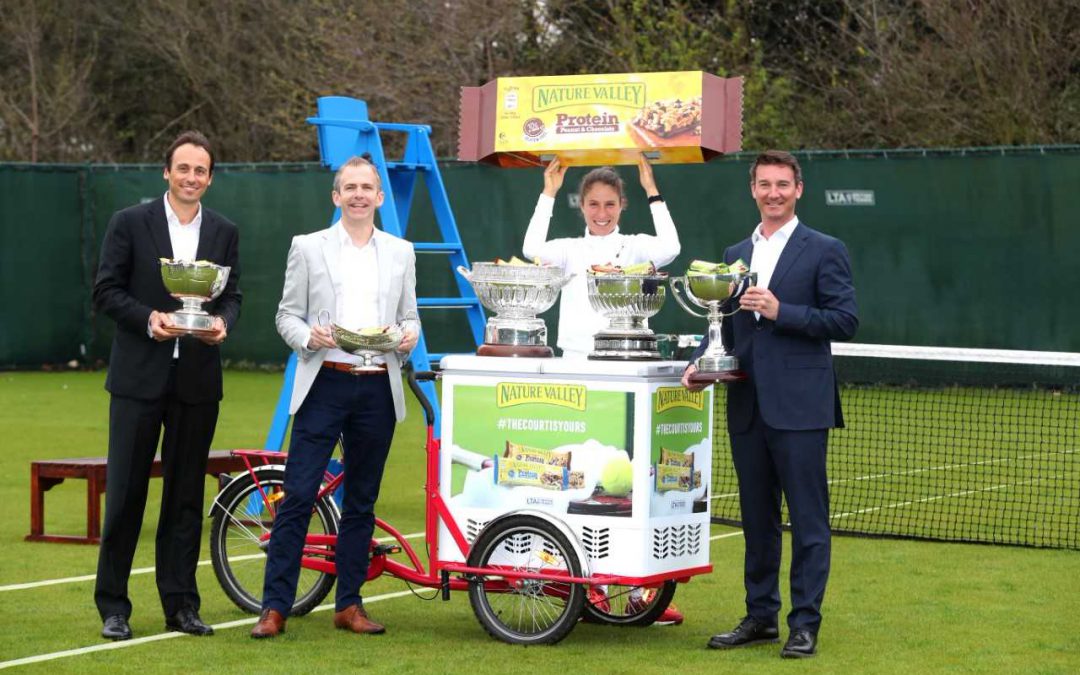 The LTA (Lawn Tennis Association) announced today it has reached an agreement with General Mills for its Nature Valley brand to become the new Title Sponsor for the LTA’s prestigious ATP and WTA tournaments at Nottingham, Birmingham and Eastbourne.  For the next three years the events will be known as the Nature Valley Open, the Nature Valley Classic and the Nature Valley International respectively.
The announcement sees Nature Valley build on its existing partnership with tennis following its entry into the sport in 2016 as the Official Snack Bar of British Tennis and building on its successful 2017 integrated campaign “The Court is Yours” which helped drive people to the LTA Court Finder to find their nearest court to play on. The award-winning campaign was supported through an ambassadorial partnership with British Number One tennis player Johanna Konta and helped contribute to Nature Valley becoming the UK’s number one Protein Bar brand in that period.
The headline partnership will provide Nature Valley and British Tennis with the opportunity to help get the British public active and playing tennis by harnessing the excitement that is generated through the events each year.
Scott Lloyd, LTA Chief Executive said, “We are extremely excited to extend our partnership with Nature Valley into the title sponsorship of three of our iconic summer grass court events at Nottingham, Birmingham and Eastbourne.  No other pre-Grand Slam circuit in the world can rival the long-standing tradition these tournaments embody, with former champions including the likes of Billie Jean King, Chris Evert, Martina Navratilova and more recently Andy Roddick, Novak Djokovic and Caroline Wozniacki.  Nature Valley has been building on its commitment to the sport and this new partnership extension highlights the tremendous success of the relationship. We both share our goal to get Britain active and healthy.  Nature Valley will continue to play an important role in helping more people play tennis more often and creating more historic championship moments.”
Richard Williams, Marketing Director General Mills Northern Europe said, “At Nature Valley, our vision is to be the world’s most iconic snack bar brand so we are delighted to become the headline partner for such an iconic part of the global tennis calendar.  Having more than quadrupled our investment in the sport since we first started in 2016, this elevated sponsorship deal is a demonstration of Nature Valley’s unwavering commitment to British Tennis from the grassroots right to its premier summer events and represents our largest global sports partnership since the 2012 Olympics. Our global brand ethos is about encouraging people to get outdoors in nature and we look forward to fueling large scale tennis participation over the next 3 years and helping inspire the tennis stars of the future with an equal ambition to have a Nature Valley bar in every tennis kit in Britain.”
Fans have never been more engaged in British Tennis summer events, with ticket sales already up on average 50% compared to 2017 across all three events at Nottingham, Birmingham and Eastbourne.  Tickets are still available by clicking through: https://www.lta.org.uk/major-events
KEY QUOTES FROM THE STARS:
Johanna Konta – Nature Valley Open 2017 Runner-Up and current British No.1:
“These tournaments provide me with the perfect pathway to Wimbledon. Last year starting off by reaching the final in Nottingham proved to be the best preparation possible as I enjoyed my most successful Wimbledon ever, and hopefully it will have the same effect for 2018.  As always I know there will be a really strong player field at the Nature Valley Open, the Nature Valley Classic and the Nature Valley International.  I’ll face some tough opponents in competitive matches, but I can’t wait to get on court and fly the flag for British tennis.”
Petra Kvitova – Nature Valley Classic 2017 & two-time Wimbledon Champion:
“That week in Birmingham was so special for me.  It was like a fairy-tale.  I got amazing support. I always love playing on grass and in the UK so I’m really looking forward to coming back.”
Caroline Wozniacki – 2009 Nature Valley International & 2018 Australian Open Champion:
“The Eastbourne fans have always given me a very warm welcome to Devonshire Park and I’ve had some memorable results there over the years, particularly winning the title in 2009. I hope to build on my 10-year history at the tournament this summer, and to get the best possible grass court preparation in at the Nature Valley International ahead of Wimbledon.”
Novak Djokovic – Nature Valley International 2017 and 12-time major champion:
“This was the best possible build-up and preparation for Wimbledon.  I have nothing but a positive impression of the tournament and of Eastbourne.”
– ENDS –
Nature Valley media enquiries, please contact:
Marie Sterry Marie.Sterry@grey.com 07557 315633
LTA media enquiries please contact:
John Dolan John.Dolan@LTA.org.uk
NOTES TO EDITORS:
Grass Court season Milestones in 2018