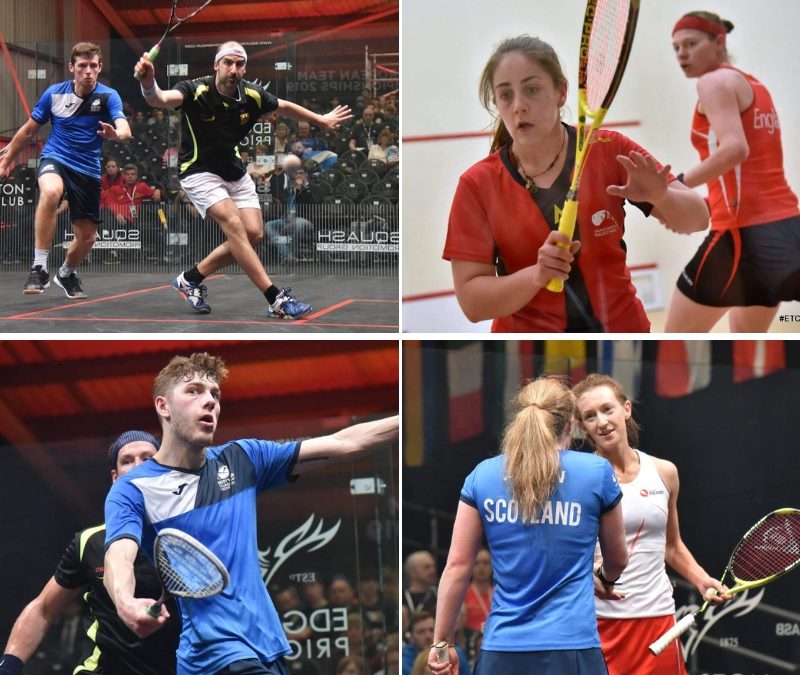 It was a great day for Scotland as the 2019 European Team Championships got under way at the Edgbaston Priory Club in Birmingham with their men’s and women’s teams both causing upsets that put them within reach of unexpected semi-final places.

In Division One, comprising eight teams in two pools with the top two going through to the semis, all the teams played twice today with women’s top seeds England and France and men’s top seeds France and England both notching up two wins to all but seal their semi-final places – but defending champions France needed to rely on points countback after Scotland’s Rory Stewart fought back from two-nil down to force a 2-2 draw.

Top seeds and defending champions France eased to an opening Men’s Pool A win 4-0 over Hungary and then had that thrilling draw with the Scots in the second match to secure their last four place. Scotland played 8th seeded Hungary seeking a win that would put them through.

Men’s Pool B went the way of the top seeds as England beat first Switzerland and then Wales – although Joel Makin made the second seeds work for it as he despatched Declan James in the top string match – and third seeds Spain also won twice setting up a pool decider with England tomorrow.

Women’s Pool B followed a similar pattern, with second and third seeds France and Belgium both notching up wins over Spain and Switzerland – Tinne Gilis the Belgian heroine as she won the deciding match in both encounters – and they’ll meet tomorrow, effectively to see who avoids hot favourites England in the semis.

The English women didn’t have it all their own way in Pool A though, after a 3-0 win over Scotland they found themselves one-nil down to Wales after Tesni Evans beat Sarah-Jane Perry in straight games. They recovered to win, with Millie Tomlinson, late replacement for the injured Alison Waters, winning twice on her England debut.

Scotland went on to shock fourth seeds Netherlands – who had beaten Wales in the opening match – as Lisa Aitken beat Milou van der Heijden 11-9 in the fifth and youngster Georgia Adderley of the better of Tessa ter Sluis in a tense four games.

With England to play the Netherlands and Wales meeting Scotland tomorrow, the semi-final places are still very much up for grabs.

For more information on draws, schedules, results and to  purchase tickets visit www.edgbastonpriory.com/etc2019