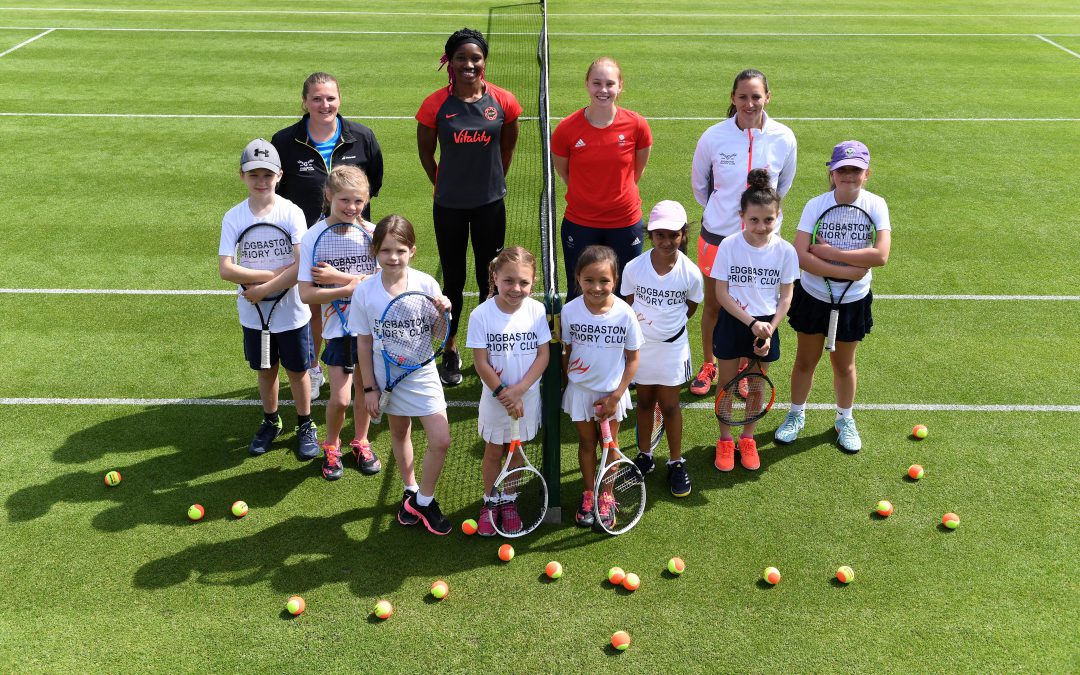 One of Birmingham’s leading female sports figures was on court in her home city today to inspire the next generation of local sports stars as the countdown to the prestigious Nature Valley Classic, Birmingham got underway.

England Netball Captain Ama Agbeze joined local rising teenage tennis star Lillian Mould and girls from schools across the city for a tennis session with Midlands Coach of the Year Claire Norman at the Edgbaston Priory Club where preparations for the tournament are in full swing with a month to go.

Agbeze will captain England in the Netball World Cup in Liverpool in July just weeks after some of the world’s leading female tennis players converge on Birmingham for the 38th edition of the competition.

The Nature Valley Classic is set to feature the strongest line-up in its 38-year history with current world No.1 Naomi Osaka along and world No.5 and defending champion Petra Kvitova along with British No.1 and Fed Cup heroine Johanna Konta all confirmed to play.

Previous winners of the tournament have included some of the games’ most iconic female tennis players. Billie Jean King won the inaugural tournament in 1982 and Martina Natratilova took the singles title in 1989.

“It was great to be back in my home city and get on court with the girls and Claire and see how the preparations are going for the tournament. The Nature Valley Classic has always been a huge part of the city’s sporting calendar and some of the past winners have been real trailblazers for women’s sport. We’ve seen the impact that our success as a netball team has had in terms of getting more young girls playing and hopefully the recent Fed Cup success can do the same for tennis.

I remember coming to the tournament for the first time when I was a schoolgirl in Birmingham. It is an amazing opportunity for girls to see some of the best players in the world on their doorstep and that can only help inspire them to pick up a racket and play.”

This year’s tournament will again feature a Schoolzone where up to 1500 children and young people from across the city will be able to take part in tennis activity as part of the LTA’s mission to open the sport up to more people.

“Ama and the England netball ball team are such a huge inspiration to young girls across the country so it was amazing for the girls here today to get the chance to meet and get on court with her. It is important that young girls have positive female role models to look up to whether they are players or coaches. It can make a huge difference in getting them to take part in sport.”

“At the LTA we are proud to stage events like the Nature Valley Classic. They play a vital role in increasing the visibility of our sport and opening tennis up to new audiences.

The tournament has a proud history of attracting the best female players in the world so we’re really excited to have our strongest ever line-up this year. The fact that the best players in the world return here year after year shows how well the tournament and the city is regarded. It really brings the tennis community in the West Midlands together and is a fantastic opportunity for people to come and see the best in the world at a superb venue.”

To purchase tickets or to access more information about the Nature Valley Classic, head to www.lta.org.uk/naturevalleyclassic. Centre court ticket prices start from just £12 for children under 16 and £30 for adults.

Follow @LTA on Instagram, @LTA – Tennis For Britain on Facebook, or @the_LTA on Twitter to keep up to date with all the news surrounding the players’ journeys to the grass courts of Birmingham this summer.