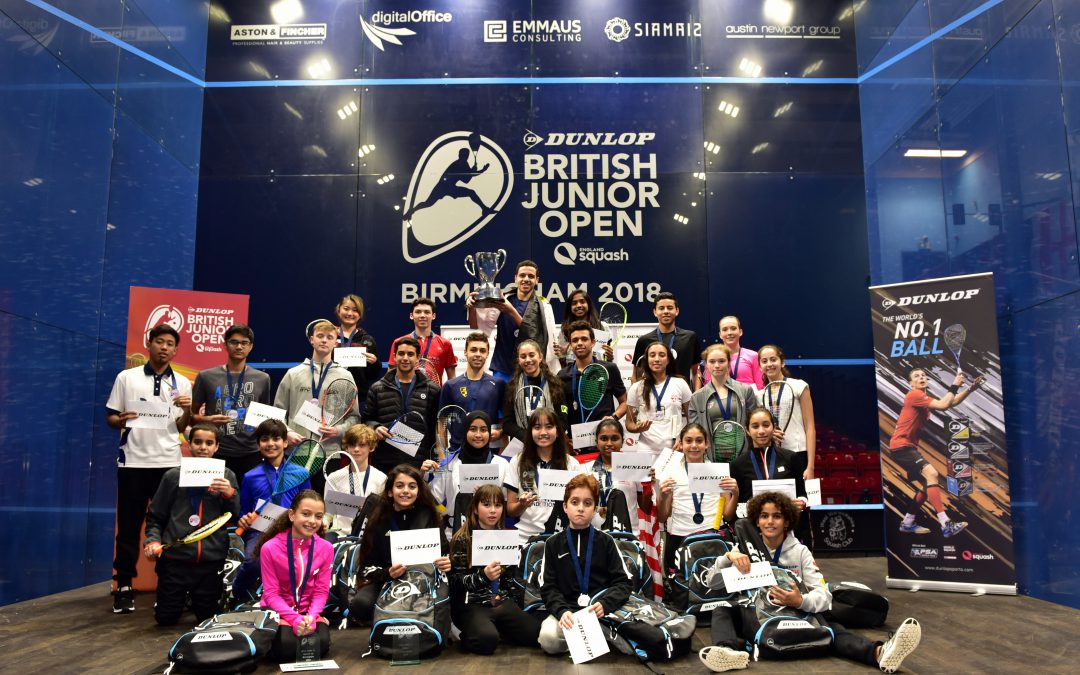 The finest juniors from around the world will descend on Birmingham, England for the 93rd edition of the Dunlop British Junior Open, with Egypt and Malaysia dominating the 2019 draws after the seedings were finalised this week.

More than 750 girls and boys representing 50 nations will compete across ten age categories from the Under 11s to Under 19s from 2-6 January in what has become the most iconic and prestigious tournament on the junior circuit.

In the Boys’ Under 19s, a trio of formidable Egyptians dominate the top three seedings with current World Junior Champion, Mostafa Asal ranked top seed, and compatriots Mostafa El Serty and Omar El Torkey seeded second and 3/4 respectively. Looking to upset the proceedings is home hero Nick Wall [3/4] from Sheffield who claimed the British National Under 19 title in October.

Girls’ Under 19 top seed Hania El Hammamy who is ranked 20 in the world, is tipped to claim her fifth championship title. Fellow compatriots Jana Shiha [2] and 16-year-old Farida Mohamed [3/4] will be looking to mount a challenge alongside 2018 semi-finalist Elise Lazarus of England seeded 3/4.

Two former Boys’ Under 15 champions could face off in the Boys’ Under 17 final if all goes to seeding in the form of Egypt’s Yehia Elnawasany [1] and England’s Sam Todd [2].

Hot favourite to claim the Girls’ Under 17 title is last year’s runner-up Marina Stefanoni [1] of America who is likely to face a titanic challenge from Egyptian no. 1 Sana Ibrahim who finished second in the Girls Under 15s last year. Asian no. 1 Sin Yuk Chan of Hong Kong [3] and the 2018 Under 15 champion Nour Khaled Aboulmakarer [3/4] of Egypt are in prime position to stake their claim.

Former champion Denis Gilevskiy [1] of Ireland and Egyptian [2] Ismail Mansour are seeded to meet in the Boys’ Under 15 final but will have to fend off Englishmen Jonah Bryant [3/4] – the 2018 Boys’ Under 15 champion and Sam Osborne-Wylde [3/4], a British National title holder.

Defending champion Aira Azman of Malaysia is favourite to claim the Girls’ Under 15 title but will have to see off a trio of Egyptians in Salma El Tayeb [2] – the 2017 Under 13 champion, Menna Hedia [3/4] and Malak Khafagy [3/4].

If all goes to seeding, there could be an almighty battle for the Boys’ Under 13 crown featuring Egyptian no. 1 Taha Ibrahim [1] and European and England no. 1 Abd-Allah Eissa [2].  Yuvraj Wadhwani [3/4] of India and Egypt’s Mohamed Zakaria [3/4] complete the top four.

Malaysia’s Nickhileswar Moganasundharam who reached the last four in 2018 is in prime position to claim the Boys’ Under 11 title as top seed but will have to first navigate past Egyptians Chris Baddour [2] and Seif El Deen Dahshan [3/4]. Malaysia’s Jayden Oon made a splash with an 11th place finish in last year’s tournament at the age of just eight and completes the top four with a 3/4 seeding.

In the Girls’ Under 11s, top seed Whitney Wilson of Malaysia will be striving to claim her maiden title after reaching the last four in 2018.  Hot on her heels will be Egyptians Sohayla Hazem Farouk [2], Shahad Hani [3/4] and India’s Anahat Singh [3/4].