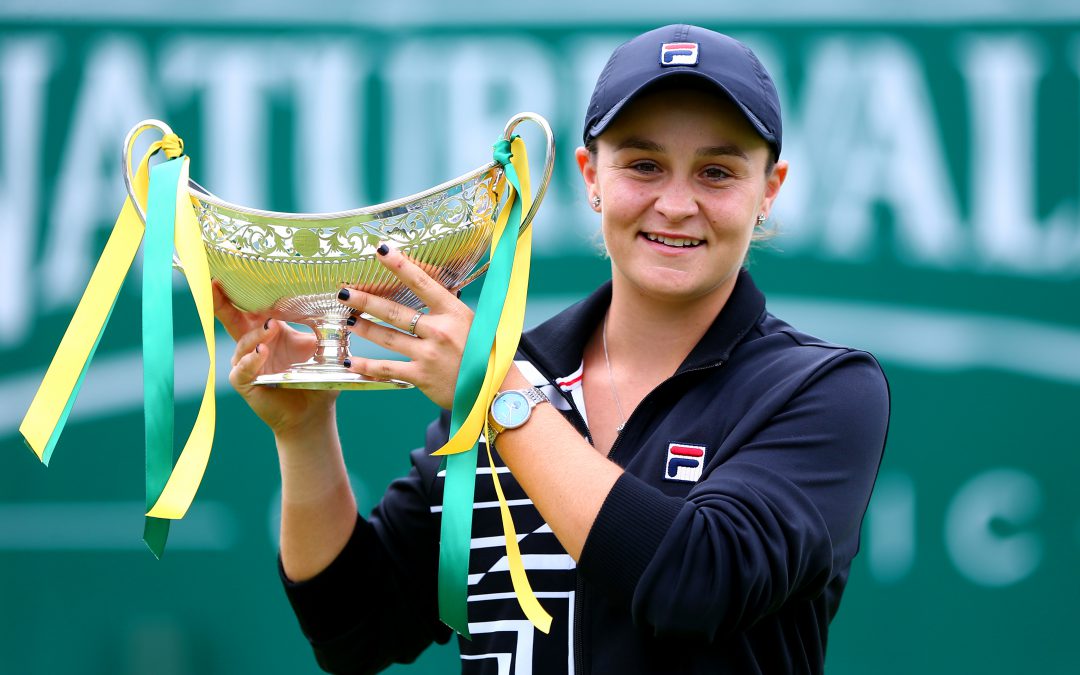 Ashleigh Barty hit her way into the history books at Edgbaston Priory Club on Sunday, beating Julia Goerges 6-3 7-5 to win the Nature Valley Classic.  Her victory ensured that she will be ranked No.1 in the world when the new standings are released today.

Twenty-three-year-old Barty will be the first Australian to reach No.1 since Evonne Goolagong in 1976 and is also the first Australian ever to lift the Maud Watson Trophy in Birmingham. Sunday’s final marked her twelfth match win in a row during the month which has seen her play the best tennis of her career, win her first Grand Slam singles title at Roland Garros, conquer the strongest player field ever seen at the Nature Valley Classic and take top spot in the rankings for the first time in her career.

Barty will receive the WTA No.1 trophy on arrival in Eastbourne. Appropriately, the trophy is actually made in Birmingham in the city’s jewellery quarter.

“It’s just hard to put into words what we have been able to achieve over the last few years and to be where we are now is just incredible. To be mentioned in the same sentence as Evonne is incredible. she is an amazing person, and what she has done in her career was incredible and what she continues to do off the court for us as a sport is amazing.”

This was Barty’s sixth career WTA Tour title and her third of this year following her victories in the Miami Open in March and Roland Garros. This is Barty’s second British grass court title after last year’s victory at the Nature Valley Open in Nottingham but her first on grass at WTA Premier level and therefore most prestigious. She is entered into next week’s Nature Valley International before heading into Wimbledon, almost certainly as top seed in the women’s draw.

“It is always a goal to try and be the best. It’s ultimately why we train, why we compete and play, but for it to happen in this way has been amazing,” said Barty. “It’s a testament to all of my team who have put so much time and invested so much passion and energy into my career and try and make me the best that I can be.”

In a final that proved to be a showcase for the best of grass court tennis, Barty took her opportunities in a close first set before falling behind at the start of the second. She clawed her way back into the set only to fall behind again and find herself set-point down when serving at 4-5. She saved that with an ace and wrestled back control of the match, breaking in the next game and serving out without hesitation, despite being on the brink of victory and with the No.1 ranking on the tip of her racket.

“Jules is an incredible competitor and she is never going to hand a match over lightly and she is always going to come up with her best stuff when her back is against the wall,” said Barty. “So it was important for me to try and stay in touch and getting that break back early in the set was really important to not kind of give her a sniff of winning a set on her serve.”

A gracious and emotional Goerges was full of praise for Barty, her doubles partner and a friend since Barty was, in her words, “a little tucker” fresh from the junior leagues.

“For me, to be able to share this moment with her, was just something special and if I had to choose to lose someone today to become the No. 1, I would pick her definitely. That is why it was very emotional for me,” said the 30-year-old German. “I think it was a very high-quality match for grass court. There were just a few points here and there where I made a little bit too many mistakes, but while she also pushed me to do that and to just go a little bit more and more.”

Barty made it clear that the warmth of feeling between the two players was mutual.

“As soon as we shake hands, no matter who has won or lost the match, the relationship doesn’t change and it’s a testament to Jules as a character, she is an incredible person, someone I highly respect and love to spend time with. And yeah, I couldn’t think of a better person to be able to share the court with today.”

Su-Wei Hsieh and Barbora Strycova won the doubles title with a 6-4 6-7(4) 10-8 win over Anna-Lena Groenefeld and Demi Schuurs in a final that eventually have to be moved indoors after rain fell mid-way through. Strycova has long been a fan favourite in Birmingham and this marked her second doubles title at the Edgbaston Priory Club. She also won in 2016 with Karolina Pliskova.