BARTY STANDS ON THE BRINK OF HISTORY 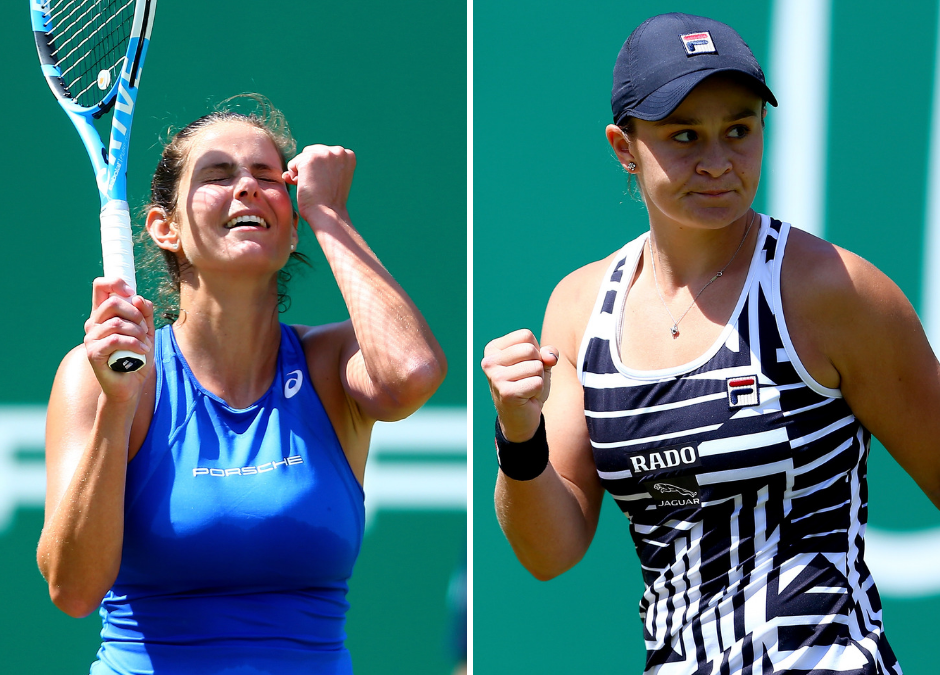 Ashleigh Barty will be playing to secure the World No.1 ranking and seal her place in tennis history when she takes on Julia Goerges in Sunday’s final at the Nature Valley Classic.

Roland Garros champion Barty has yet to drop a set this week. Saturday saw her come through a high quality grass court semi-final joust with Barbora Strycova 6-4 6-4 to win her eleventh match in a row and take a step nearer the World No.1 ranking, which will be hers if she beats Goerges to lift the Maud Watson Trophy on Sunday. She would be the first Australian woman to be ranked No.1 since Evonne Goolagong in 1976.

Against Strycova, 23-year-old Barty hammered 11 aces and 24 winners, and did not lose serve over the course of an hour and 24 minutes. For her part, Goerges also looked in imperious form in her 6-4 6-4 semi-final win over Petra Martic in the second of Saturday’s singles matches on the Ann Jones Centre Court.

Sunday will mark Barty’s second final in Birmingham, where she was runner-up to Petra Kvitova in 2017. She will be bidding for her sixth career WTA Tour title and her second on grass after her victory in last year’s Nature Valley Open in Nottingham. She could also become the first Australian ever to win the singles title at the Nature Valley Classic.

If she loses in the final, she will be just two points short of catching current World No.1 Naomi Osaka – the smallest margin between the top two ranked players since WTA Rankings began.

“I have to try and do what I can do and that is prepare and do as best that I can tomorrow and try and play a good tennis match and if I win, it’s a bonus,” said Barty, who has looked and sounded at her most relaxed this week despite the huge prizes she is playing for. “There are all things that come with it. But those things are certainly not what I’m worried about. It is not going to change the way that I sleep at night, if I don’t get there or not. If it happens, it happens. If it doesn’t, it doesn’t.”

If Barty wins, it will be the first time in history that a new WTA No.1 will be crowned during a pre-Wimbledon British grass court event. The only other times this has happened before on British soil was when Martina Navratilova (1978) and Serena Williams (2002) clinched the No.1 ranking by winning Wimbledon.

The only other female players to win the singles title at Roland Garros and their next event on British grass courts have been Serena Williams, Steffi Graf (who managed this four times), Martina Navratilova, Chris Evert and Margaret Court, which would put Barty in some esteemed company.

While the focus of attention has been largely on Barty this week, Goerges has put together a string of impressive performances, not least in her efficient dispatch of Martic on Saturday. Goerges proved by reaching the semi-finals of Wimbledon last year that she can adapt her big-hitting game well to grass. Thirty-year-old Goerges has won seven career WTA singles titles – most recently in Auckland in January – but has yet to lift a trophy on grass.

“I think both of us just focus on ourselves and there is not a big secret of playing each other if you practice that much already together,” said Goerges, looking ahead to playing Barty. “She knows that I will be aggressive. I know there are a lot of slices coming and some volleying, good serving, and producing some good angles, so there is no secret about it and she knows what I’m going to do, I know what she is going to do. Every match starts from zero. It’s a new chance for both of us tomorrow and just the better one should win.”

Barty and Goerges withdrew from their scheduled doubles semi-final against Anna-Lena Groenefeld and Demi Schuurs, citing a right arm injury to Barty but making it clear there was no cause for concern regarding her fitness for the singles final. Groenefeld and Schuurs progressed to the final via walkover and will take on Su-Wei Hsieh and Strycova in Sunday’s doubles final after they beat Jelena Ostapenko and Galina Voskaboeva 6-0 6-3 in the last four.

Sunday’s singles final has now been scheduled 30 minutes earlier and will start at 1pm. This is a precaution in light of potential showers forecast for the Birmingham area late Sunday afternoon. The doubles final will follow the singles final on the Ann Jones Centre Court.